New Maps of Hell - Kingsley Amis on I Am Legend 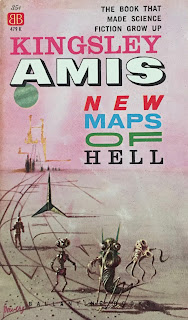 New Maps of Hell is a critical analysis of science-fiction by author Kingsley Amis, originally published in 1960 by Harcourt, Brace & World. Reprinted in 1961 by Ballantine Books (cover art by Richard Powers).

Speaking of the boundary between fantasy and science-fiction stories, Amis noted:


“... although vampirism is one of the staples of nineteenth-century fantasy, Richard Matheson’s novel I AM LEGEND makes brilliantly ingenious and incidentally horrifying use of the myth for science-fiction purposes, whereby every traditional detail is explained along rational lines: the wooden stake through the heart for instance, which put paid to Dracula and so many of his playmates, is necessary in order to maintain the dissension of the wound—bullets and knives are no good for that job, and the microbe which causes vampirism is acrophobic.”

More than a decade later, Amis would write an introduction to Matheson's The Shrinking Man, first appearing in the hardcover edition from David Bruce & Watson (London, 1973) and later reprinted in the Gregg Press edition (1979).
By John Scoleri at April 17, 2018 No comments: