I Am Legend Motion Comic

I Am Legend fan Marc Ihlow has created a motion comic using Elman Brown's artwork. Check it out: 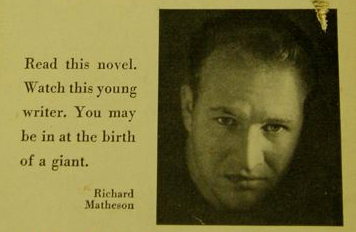 Today I choose to celebrate the life and phenomenal body of work of the most influential writer in the world. Well, to this reader at least. And for anyone coming to this site, you probably share some affection for this amazingly gifted writer.

I have had the great honor of meeting many inspirational figures in my lifetime, and yet of them (ranging from George Lucas to Ralph McQuarrie to George Romero to Steve Jobs), none found me to be speechless. Only Richard Matheson. I must have fumbled out a few words as I held out my first edition paperback of I Am Legend, which he graciously signed to me (so somehow I must have gotten my name out). And on that evening in 1990, after he received the lifetime achievement award from the HWA (then Horror Writers of America, now Horror Writer's Association), I more comfortably walked over to congratulate him on this richly deserved honor, in my then 20 year-old estimation.
In 2007, I flew down to LA to attend what I imagined would likely be Richard Matheson's last book signing at Dark Delicacies, timed with the theatrical release of the latest version of I Am Legend. Though I had seen him a handful of times in the ensuing years, I wanted to take one final opportunity to say thanks. And I'm glad I did.

For Robert Neville and I Am Legend—a thousand times over. For Scott Carey and The Shrinking Man. For Richard Collier and Bid Time Return (which I read from at my wedding). For "Prey", and a hundred more truly amazing stories. For everything.

Matheson is a writer whose influence far surpasses his name recognition. Without even knowing it, millions have been touched by his gifts. Through The Twilight Zone. Duel. Somewhere in Time. The Legend of Hell House. What Dreams May Come. Any number of Roger Corman's Edgar Allan Poe adaptations. The Incredible Shrinking Man. The Last Man on Earth. A Stir of Echoes. The Night Stalker. Trilogy of Terror. And through each of these, and those adaptations yet to come, he will be fondly remembered, and continue to live on.

Richard Matheson had a clear belief about what happens when one dies. He wrote about it in his novel What Dreams May Come, and in his non-fiction book, The Path. As he embarks on that great mysterious journey, I hope he finds it to be everything he imagined and more.
By John Scoleri at June 24, 2013 No comments:

I Am Legend... animated? En español?

Stumbled across this short animation by Koosuke Furuya on Vimeo and wanted to share it here.

Soy Leyenda Richard Matheson from Koosuke Furuya on Vimeo.
By John Scoleri at April 20, 2013 No comments:

Walking in the footsteps of Robert Neville

I encourage you to check out an interesting article by Geoff Nicholson from the Los Angeles Review of Books, in which he seeks out the actual locations where a number of books take place, including I Am Legend.

I, and others, have made attempts to find the number of the house where Matheson lived on Cimarron Street, and it seems he simply doesn’t remember. Cimarron is a long street, stretching from above the 10 to well below the 105, and there’s also a Cimarron Avenue and a Cimarron Way in Gardena, which actually fit better with the geography of the novel, and although I enjoy an aimless drift more than most, a dozen-mile expedition to an unspecified address in Gardena was too nebulous even for me.

That said, Nicholson was able to retrace the steps of Charlton Heston from a number of locations used in the filming of The Omega Man. You can read the whole article here.