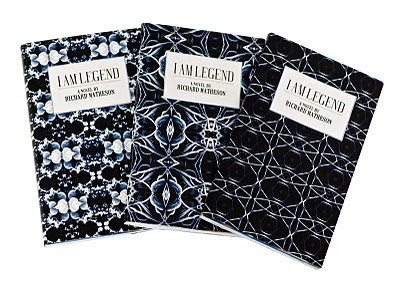 In my continuing search for editions of I Am Legend from around the globe, I stumbled across these interesting cover designs online.
University of Brighton Graphic Communication student Madelaine Crampton had a cool idea: "Creating a book sleeve design for 'I Am Legend' the idea of using blood cells and bacteria imagery to create a repetitive pattern."
On Madelaine's blog you can see the evolution from initial concepts to these three final designs. While not actual published book covers, they were too cool not to include here.
By John Scoleri at December 08, 2010 No comments:

Stock Up On I Am Legend!

Every now and again, Amazon places I Am Legend on sale, and I always make a point to buy a handful of copies so I have extras on hand to give to new readers (and they make great stocking stuffers).
Here's your chance to pick up the trade paperback of the novel and selected stories for less than the cost of the mass market edition.
By John Scoleri at October 31, 2010 1 comment: 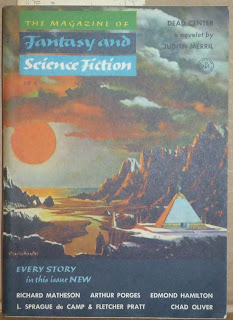 Illustrating I Am Legend: Patrick Jones 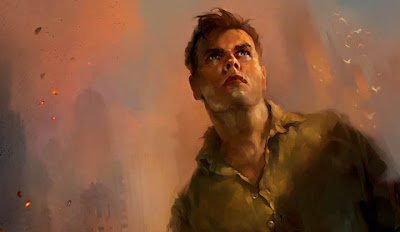 In 2009, the Easton Press released a five-volume set titled The Day After Doomsday, including Earth Abides by George Stewart, I Am Legend by Richard Matheson, On the Beach by Nevil Shute, Alas, Babylon by Pat Frank, and Lucifer's Hammer by Larry Niven and Jerry Pournelle. As described on their website:

By virulent disease...by nuclear war...by catastrophic natural disaster. These are the breathtaking novels that envision the end of the world as we know it and incisively portray the effects on the handfuls of survivors. Each book features an original frontis illustration by renowned science-fiction artist Patrick Jones.

As a huge fan and collector of all things I Am Legend, I sought out artist Patrick Jones to discuss his work on that book and the others in the Day After Doomsday series. You can read the full interview over at bare•bones. I have excerpted the portion on creating his I Am Legend illustration below.

bb: Had you read the book prior to the assignment?

PJ: I had only read I Am Legend and was a big fan of Richard's work, especially Legend and The Shrinking Man, so that was the real thrill for me, with the other books as a bonus (I'm intrigued by tales of the last people on Earth).

bb: Can you walk me through the specific process with the creation of the I Am Legend illustration. I'm interested in the order in which the concepts were created, and what led to the changes. It appears that you had three distinct concepts: Neville in the pit, Neville on the car, and Neville standing with the rifle. I'm also interested in the approximate size of the pieces.

PJ: The warm up sketch is A4 and is the earliest taste of what's to come. This stage is the most changeable as the art director never sees it, it's just my first feelings when reading the script. The art director comps are usually four rectangles on an A4 sheet in pencil, I then scan them and add tone on computer. If I have time enough to do the art in oils then all these stages are done with paint.

My first comp focused on Neville's loneliness so the comp order started with the pit idea, then moved to a more heroic idea, having Neville use an overturned car as a vantage point, but with the same sense of loneliness. In the end I came back to my original musings showing him walking the lonely streets defiant. Luckily the art director choose that comp. 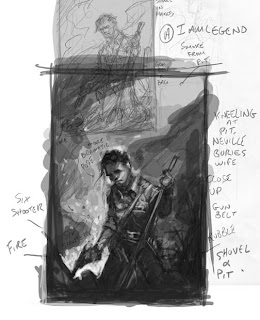 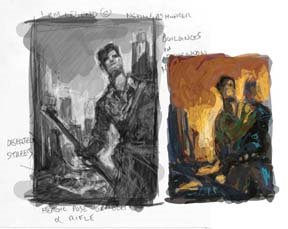 bb: With Legend, were you familiar with any of the cover art that had been used on prior versions? If so, did that influence you in any way, either inspiring you to go a certain direction or in fact avoid a particular concept?

PJ: I think I first read the Corgi edition many years before with Neville standing over his wife by the pit but can't be sure, I was more aware of the Gold Medal Book art for some reason, so the pit was in my mind to begin with. I remember the Charlton Heston movie tie in image from way back so maybe that influenced me toward the heroic (I was a huge fan of The Omega Man as a kid).

To find out more about Patrick Jones and his work, I encourage you to check out his website. His I Am Legend illustration is available in his store as signed and numbered giclee limited to 100 copies.