Illustrating I Am Legend: Jim Thiesen

I first became aware of artist Jim Thiesen in 1995 when he painted the cover to TOR Books' first publication of Richard Matheson's I Am Legend. I immediately fell in love with the cover, which I felt managed to capture the epic scope of Matheson's novel. I purchased the original art, and discovered that I was already familiar with a great deal of Thiesen's other art by sight, if not by name. I thought it as about time someone sat down to find out a little bit more about this artist who has provided artwork for such high profile writers as Stephen King, Brian Lumley, and Thomas Harris. 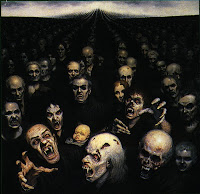 IAL Archive: Were you aware of Richard Matheson's I Am Legend before you got the cover assignment?
Jim Thiesen: No, I was not familiar with the book.  The art director told me it was about vampires—lots of vampires!

IAL: What was your vision for the cover art? Were you pleased with the results? I'm of the opinion that it in many ways it's the best thematic representation of the novel of all the cover art that has been used.

JT: I wanted to create lots of vampires, but I wanted them to flow like one continuous entity. I wanted to give them a kind of H.R.Giger-like feeling. I appreciate your appreciation of the piece. But as with most of my work, I would like to keep working on it.

IAL: Were you aware when Tor digitally manipulated the art for their Orb trade paperback? What are your thoughts on that versus your original painting?
JT: I was not aware of any of the things that TOR was doing with my work—and not compensating me for, which by law they are supposed to do.  As you know, last year I found out about quite a few of the things that TOR has been doing illegally with my art. Obviously I'm not happy about it. I'm not happy about not getting paid, nor with the way they have manipulated my work. Unfortunately prosecuting them would not be financially worthwhile.

IAL: That revised artwork (cropped - perhaps to remove a vampire baby, blurred, and one foreground head relocated) has gone on to be used in several countries around the world, second only to the Will Smith movie tie-in art. How does it feel to have your art (albeit in an altered form) seen by millions of readers around the globe?
JT: The art has changed so much it hardly feels like mine anymore.

2011 Post Script:
A new edition of I Am Legend is forthcoming from TOR, and if the cover shown in a recent Richard Matheson interview in Fangoria is accurate, it restores Jim Thiesen's original art, cropped to remove the horizon, and it appears once again manipulated to remove the baby.

Check out my full interview with Jim Thiesen, including an extensive gallery of his art.
By John Scoleri at February 26, 2011