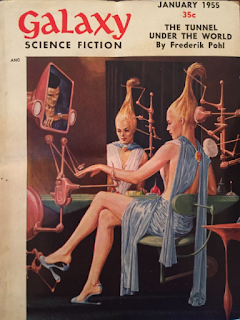 I previously reprinted what I believe is the first published review of I Am Legend from the Magazine of Fantasy & Science Fiction (November 1954). I'm back with another early review, this one from anthologist Groff Conklin, book critic for Galaxy Science Fiction. This ran in the January 1955 issue of that magazine.


For what I think is Gold Medal's first venture into the field of original science fantasies, it has chosen a weird and, I fear, rather slow-moving first novel* by a man heretofore known for his excellent short horror tales.

I Am Legend tells of a disease that almost completely wipes out the human race, leaving behind only a handful of hideously changed creatures to attempt to revive civilization.

*As most of Matheson's fans are already aware, I Am Legend was not Matheson's first novel. While it was his first genre novel, it was preceded by Someone is Bleeding and Fury on Sunday, both published by Lion books in 1953.